Earlier this week, the Jamaican government received the first shipment of the much sought-after COVID-19 vaccine. Prior to its arrival from India, there had been much debate as to who would be rolling back their sleeves to take what could be one of the most important impalements of their lives. Conspiracy theorists have been quite vocal about their stance on the ‘deadly’ Covid-19, the pandemic, and the rushed vaccine. Though these people are prevalent around the world, it is the varying positions taken by Jamaican entertainers and the subsequent pushbacks they have been receiving that have Caribbean locals talking.

Both Buju Banton and Spragga Benz have lashed out at the government’s protocols to quell the spread of the virus.

Buju Banton went on an “anti-mask-wearing” tirade late last year via Instagram, for which he received some backlash. Adopting a very Darwinian stance as it relates to “survival of the fittest,” several persons, including his children, criticized his standing on the matter.

From all indications, he has not backed down, recently joining fellow entertainer Spragga Benz in criticizing the government’s latest actions.

Before Spragga stuck it to the government, he seemingly made a bit of time to comment on Bounty Killer’s recent pro-vaccine post. On Monday, the self-proclaimed Poor People Governor shared a poster for an impending show which he and fellow entertainer Beenie Man would be headlining in Ibiza, Spain, later this year. In his caption, he urged his Instagram followers to get vaccinated so as not to miss out on the opportunity to see the one-time rivals perform live.

Spragga took Instagram to express his disgust toward Bounty’s call to action.

“Mi see some BIG BAD Jamaican artist promoting di vaxi agenda already… either dem get a promise or dem really dunce to the program,” he said.

A newspaper article published a day later further angered Benz. The attention-grabbing headline expressed that the Jamaican government would be granting immunity to the makers of the vaccine. This means the company would not be liable if persons became ill after taking the vaccine.

He further questioned if the government should not be responsible for protecting its people over a vaccine company.

Aside from Spragga Benz and Buju Banton, other entertainers have voiced anti-vaccine sentiments, including Sizzla, Tony Rebel, Chronixx, Kabaka Pyramid, and Lee’ Scratch Perry. On the flip side, entertainers who have voiced their willingness to take the jab include Shaggy, Ce’cile, Macka Diamond, and Bounty Killer. 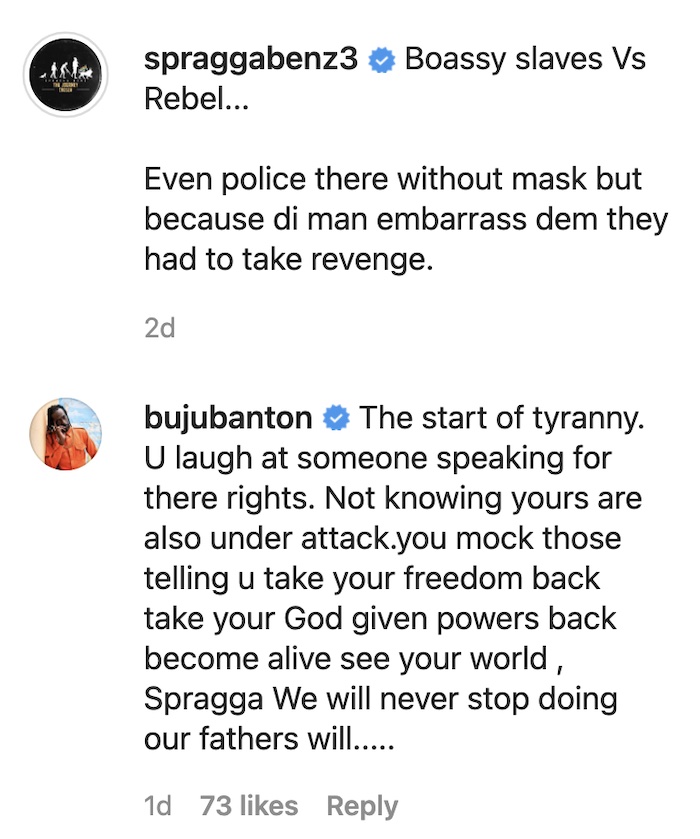