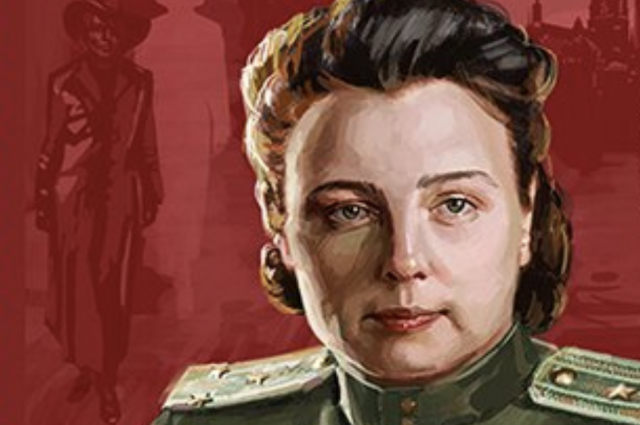 When KGB Chairman Vladimir Kryuchkov at the beginning of perestroika “declassified” this woman, calling her one of the best Soviet intelligence officers, she began to write the book “Now I” can tell the truth. The name of the scout was Zoya Ivanovna Voskresenskaya.

But her name has been widely known for a long time not only in the USSR, but and abroad. The books of the winner of the State Prize and the Lenin Komsomol Prize of the children's writer Voskresenskaya were published in millions of copies. Since the mid-1960s, Soviet schoolchildren have studied her books about Lenin. By the way, she wrote about Ilyich without undue pathos, just like a person. And              Krupskaya made of a copper penny. But it was in Zoya Ivanovna's other life.

Zoya was born on April 28, 1907 in the family of the assistant head of the Uzlovaya railway station in the Tula province. In 1920, her father died of tuberculosis. The widowed mother with daughter and two sons moved to Smolensk and soon became seriously ill. A sick mother and two younger brothers remained in the care of 14-year-old Zoya. The case helped. She met a friend of her father who got her a job. And not anywhere, but to the military unit of the Cheka, where she became a librarian and scriber. At 16 yoya — political instructor of a colony for juvenile delinquents.

She worked at a factory in Smolensk, was an active Komsomol member. In 1927, she married Komsomol activist Vladimir Kazutin. The young husband was sent to party studies in Moscow, and    zoya had a son whom she named Vladimir. A year later, Zoya moved to the capital to her husband, but family life did not work out, and they broke up. A next — work as a librarian and a typist in the transport department of the OGPU. Apparently, the heads of the foreign department of the OGPU soon drew attention to a beautiful, intelligent and executive employee and took her to the department. Then she with mother and one and a half year old son (who grew up and also became a scout) went to Manchuria, to Harbin. There, Zoya was only a typist in the representative office of the Soyuzneft syndicate, but for two years she scrupulously collected intelligence, so necessary for the leadership of Soviet intelligence during the period of an acute crisis on the CER.

Returning to the USSR in 1932, she headed the foreign department of the OGPU in Leningrad. Then, under the operational pseudonym «Irina» had illegal work in Latvia, Germany and Austria. Before leaving for the Baltic States, a legend is created for Zoya, as if she were a baroness, which is consistent with her impeccable manners, delicate taste and the ability to behave with dignity. But her main work began in Finland. She arrived there in & nbsp; 1935 and & nbsp; officially took the position of head of the Intourist representative office. in Helsinki. In fact, this young pretty woman was the deputy resident of the Soviet intelligence in the country. She quickly got into  the affairs of residency and three months after her arrival in the country she mastered the Finnish language so much that the Finns took her for their own.

In 1936, a new resident arrived in Finland, he  — Soviet consul Boris Rybkin, who worked under the surname Yartsev. At first, relations between the new resident and his deputy did not work out, but very little time passed, and Voskresenskaya married Rybkin. Outwardly respectable “Madame Rybkina” doing risky work. She provided communications with & nbsp; illegal employees of the Soviet foreign intelligence and & nbsp; agents. She worked with the former leader of the Kronstadt uprising, Stepan Petrichenko, who, after the failure of the uprising, emigrated to Finland, but still began to cooperate with the Bolsheviks.

Just before the war with Finland, Voskresenskaya returned to the Soviet Union as an experienced operative and soon became an employee of the central intelligence apparatus, a leading analyst (a special analytical unit was created only in 1943). It was to it that the data from the underground group "Red Chapel", operating in Nazi Germany, flocked.

A reception organized by the German embassy in early June 1941 in honor of the arrival in Moscow of a group of leading artists from Berlin convinced Zoya even more that the war was not far off. “Madam Yartseva”, invited to a reception from the All-Union Society for Cultural Relations with Abroad, managed to notice on the walls of the rooms adjoining the hall where the celebration took place, rectangular spots from the pictures taken. And through the half-open door of one of the rooms, a pile of suitcases stacked there.    — the embassy is preparing for the evacuation. A few days later, Stalin had an analytical note on      desk, which stated that a German attack on the USSR could be expected at any moment.

At the beginning of the war, "Baroness Irina" almost sent to the rear of the Germans, where she was supposed to transmit information about the movement of enemy echelons. This order was quickly canceled, and Voskresenskaya began training and transferring reconnaissance and sabotage groups behind the front line.

From the end of 1941 to March 1944, together with her husband, an adviser to the Soviet embassy in Sweden and a resident, she worked as a press secretary and his deputy.

In  diplomatic circles in Stockholm, recalled Pavel Sudoplatov, this Russian beauty was known as Zoya Yartseva, who shone not only with beauty, but also with excellent knowledge of German and Finnish languages. The couple were very popular in the capital».

Voskresenskaya was engaged in organizing the collection of information about & nbsp; German military transit through Sweden and & nbsp; maritime traffic between Sweden and & nbsp; Germany, supporting anti-fascist groups in Europe. Returning to Moscow, she was engaged in analytical work, went on a business trip to Berlin and was promoted to the position of head of the department. In 1947, under unclear circumstances, her husband died on a business trip to Prague.

After Sudoplatov's arrest in 1953, she spoke at a meeting in his defense, at  ;the next day she was fired due to downsizing. She still was allowed to make it to "long service" and sent to work as the head of a special department of one of camps. Zoya Ivanovna herself recalled that she was the only colonel and woman in Vorkuta.

In 1956, she was retired. Very soon, a new popular children's writer appeared in our country, about whose life one could write more than one fascinating book.