Mishustin was told about “Bourgeois” and “Sweet Girl”

The Prime Minister inspected the greenhouse facilities of the Moscow Region

In the Soviet years, an anecdote was popular: a Russian and a Japanese are asked: “When does the first strawberry appear?” One, scratching his head, replies: “Probably at the end of June.” Another immediately reports: “About 6 am.” So far, it has not been possible to provide the vast majority of the population with year-round strawberries in Russia. But cucumbers and tomatoes consistently appear on the tables of fellow citizens, regardless of the weather outside. And this is a merit not only of foreign manufacturers. On Wednesday, Mikhail Mishustin inspected one of the largest greenhouse farms in the Moscow region: the “glass city” began to be built near Kashira after the first wave of sanctions in 2014 and currently covers an area of ​​more than 100 hectares. 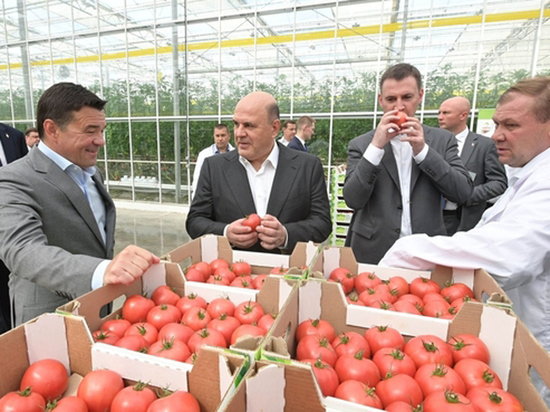 Biggest Discovery: Cucumbers and tomatoes are tropical plants. They need high humidity the most. And the bushes themselves, leaving under the transparent ceiling, practically do not differ from vines. “They are sitting on our coconut,” a local agronomist explained to journalists in an educational program. “On what, excuse me?” “On the coconut, what do you think? On coke? No, we don't have that here.” Coconut flakes are the basis of the substrate in which seedlings are planted annually. For cucumbers and tomatoes, it is different, but the result is visually the same – huge bushes that are literally bursting with vegetables. However, a high yield is primarily the merit of bumblebees, which are purchased directly from the hives and hung inside the greenhouses. “A good bumblebee is a bumblebee that works for a long time and pollinates with high intensity,” the agronomist continued to educate the media representatives. As it turned out, the Russian bumblebee is “good” only in summer. And in the most difficult period for farmers – in winter – it is sluggish and inactive. Therefore, we have to turn to foreign suppliers – fortunately, not only countries unfriendly to Russia have worthy bumblebees, but also Turkey.

Mikhail Mishustin was told that 62 thousand tons of vegetables ripen in Kashira greenhouses a year, which are sent to stores in the capital and Moscow region. There are also berries in the company's product line, but only an empty box was able to demonstrate the premiere – this year the strawberry season has already ended. But Mishustin took the tomato for testing directly from the box. “Very tasty. Correct. Sugar is felt, ”he praised. The head of the Cabinet recalled that the sanctions of 2014 gave a serious impetus to Russian vegetable growing – production volumes were almost doubled, to 1.5 million tons. Now another task is coming to the fore: providing farmers with domestic seeds. “This is the only way to achieve the food security of the country,” he stressed. (So ​​far, dependence on imports is very high – from 40 to 97%, depending on the crop. If Europe wants to punish Russia for undersupplies of gas, then it will, in principle, not be difficult to do this – it is enough to impose an embargo on seed material, which is currently under sanctions does not hit.)

The developments of Russian breeders were shown to Mikhail Mishustin in a neighboring greenhouse farm. Seeing the sign “Miami” opposite the bowl with the experimental potatoes, the prime minister carefully clarified: “Whose variety is this?” It turned out that ours, domestic, – scientists just wanted to emphasize the black color of the tubers with an overseas name. “They could call it Ink,” Mishustin immediately came up with a more appropriate name in the current geopolitical situation. However, during the inspection of the exhibition, it turned out that scientists with fantasy are also all right. On the shelves were experimental varieties “Bourgeois”, “Sweet Girl”, “General Denikin”, “Red Yakut”, “Mustafa”, etc. The head of government was shown an eggplant, round like a ball, intended for stuffing, and a white cucumber, which can be fried in a pan. “And this is our momordica,” the scientists proudly pulled out something green and shriveled from the basket. “Vegetable for diabetics with low sugar content.”

The head of the Cabinet was impressed by what he saw, but really wanted to get an answer on how to bring all these wonderful experimental varieties to industrial production and scale them all over the country. “We are looking at the big picture, and it is not fun. It seems that all the institutions are working, but we have single versions of our seed material, ”the prime minister complained. The agrarians explained that they began to invest in breeding in a serious way quite recently. And this is not a quick business: from the first experiments to the result that can be put into production, 5-6 years should pass. In addition, Russian farmers are strongly addicted to imported varieties of vegetables that are easy to use and predictable in terms of yield, and do not want to get off this “needle”, fearing to burn out on domestic varieties. “We need to show and explain the benefits. Well, the main thing is that the volumes are sufficient, ”the scientists believe. They promised the prime minister that, taking into account the momentum, support from the state and business, they will be able to ensure the import substitution of most of the seed material by 2025–2027.